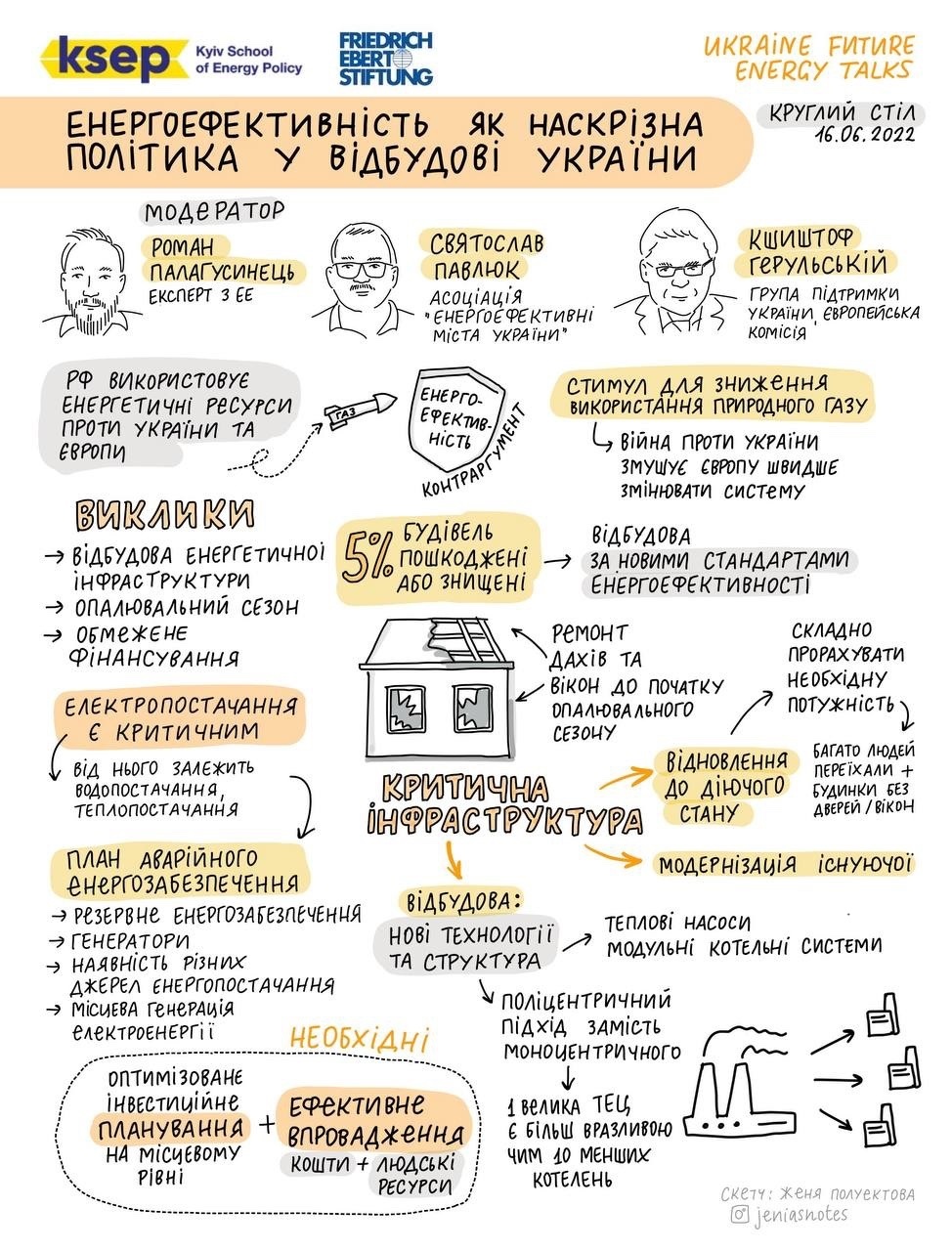 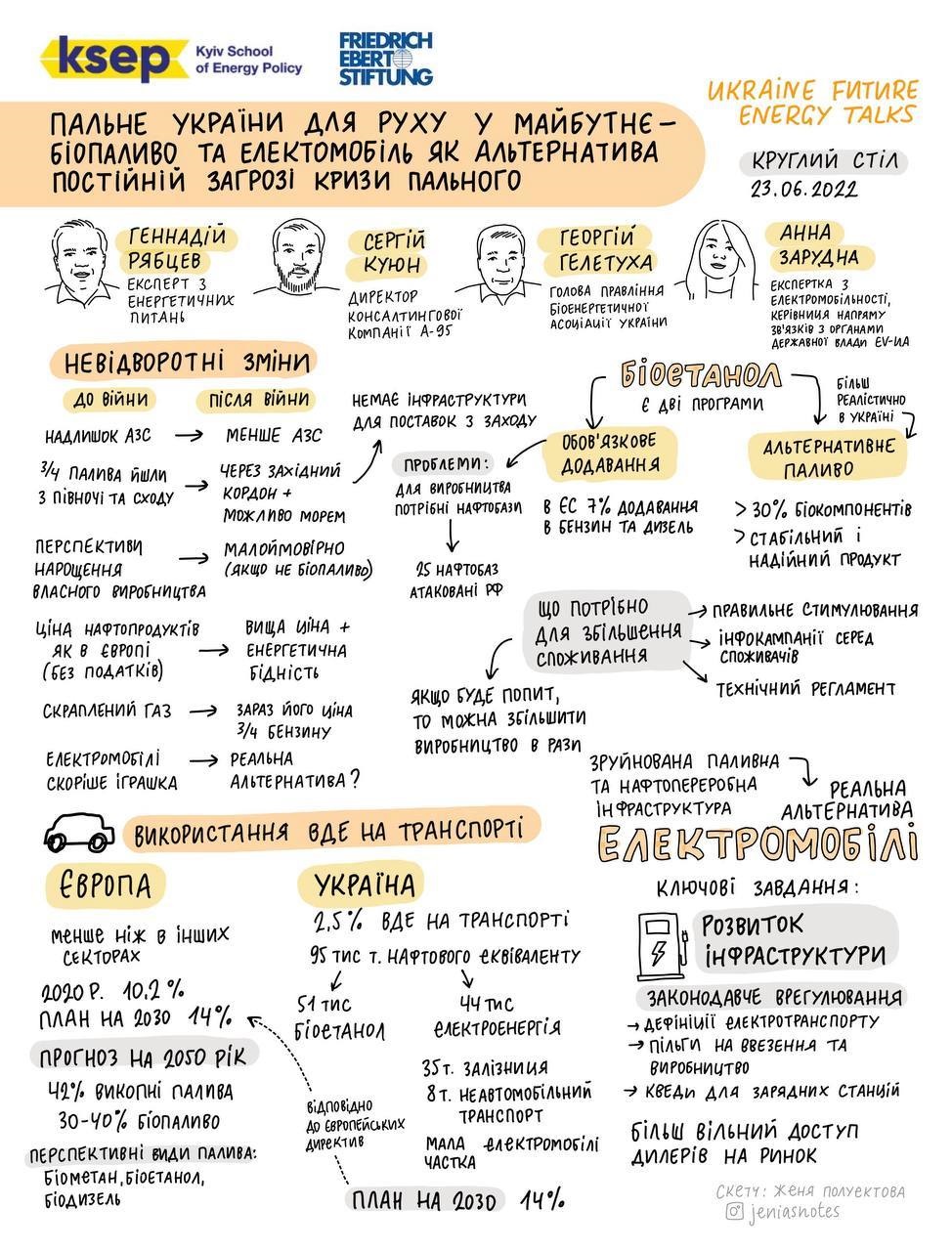 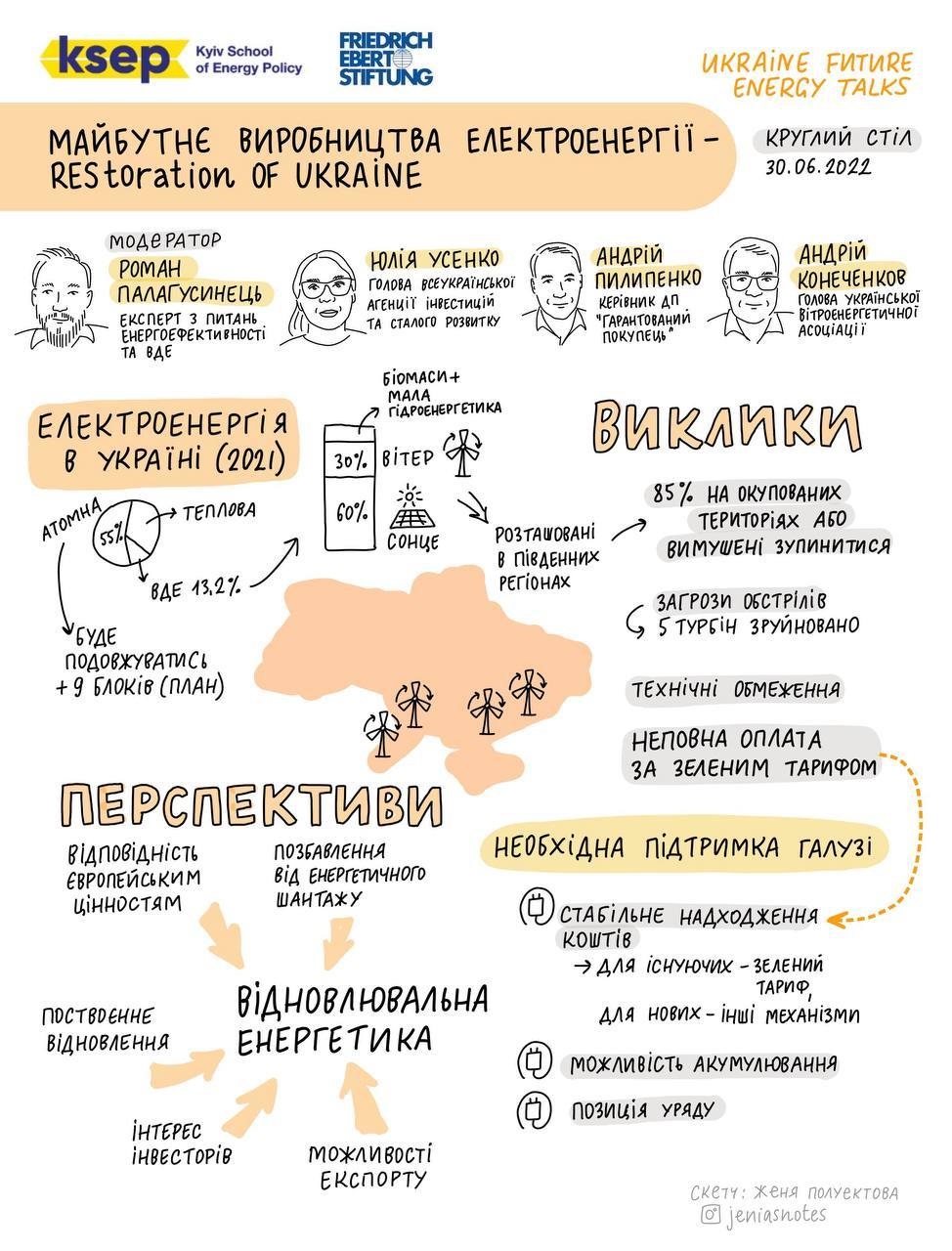 The Representation of the Friedrich Ebert Foundation in Ukraine and the Kyiv School of Energy Policy held a series of Ukraine Future Energy Talks round tables about existing problems and prospects for the recovery of various energy sectors in Ukraine. The participants of the events were representatives of the executive power of Ukraine, local authorities, state companies and enterprises, media and representatives of NGOs and international organizations, embassies and scientific institutions.

The first round table on June 16, 2022, was dedicated to energy efficiency in buildings as a necessary element of the post-war reconstruction of Ukraine. Svyatoslav Pavlyuk, Association "Energy-Efficient Cities of Ukraine" and Krzysztof Gierulski, Support Group for Ukraine, European Commission, shared their opinions during the discussion with the participants. In the conditions when 5% of buildings have already been damaged or destroyed during hostilities, and the Russian Federation uses energy resources as a weapon against Ukraine and the EU, the reconstruction according to new energy efficiency standards, using new technologies, such as heat pumps or modular boiler systems, becomes critically important. In order to prepare for the new heating season, it is important for Ukraine to repair the roofs and windows in the destroyed houses already now. It is also necessary to have an emergency power supply plan. Communities should already be thinking about backup energy sources, such as generators to get through the next heating season. Shortly, a polycentric approach instead of a monocentric approach looks promising, since one large thermal power plant is more vulnerable than ten smaller power plants.

The second discussion (June 23, 2022) was devoted to the problems of the fuel market in Ukraine. The participants were addressed by Hennadiy Ryabtsev, an expert on energy issues, Serhiy Kuyun, director of the A-95 consulting company, Heorhiy Heletukha, chairman of the board of the Bioenergy Association of Ukraine, Anna Zarudna, an expert in electromobility, head of GR, EV-UA — Ukrainian Association of Electric Vehicle Market Participants. As a result of Russian aggression more than 25 oil depots were damaged or destroyed, which led to an increase in the price level in Ukraine and strengthened energy poverty. The experts also talked about the prospects for the development of the biofuel market in Ukraine. On average, in the EU, the use of RES in transport is only about 10% (17 million tons of oil equivalent are already produced using biofuel), in Ukraine, according to the data from 2020, this figure was 2.5%. According to the draft National Action Plan for the Development of Renewable Energy by 2030 in transport, this indicator should be increased to 14% by 2030, which correlates with the EU plans. In order to stimulate this market, Ukraine needs to adopt the appropriate technical regulation and conduct an information campaign for consumers. The key to the further development of the electric mobility infrastructure is legislative regulation, freer access of dealers to the market, and tax exemptions for the import and production of electric cars.

The third discussion, held on June 30, 2022, was devoted to the future of electricity production in Ukraine. Speakers were Andriy Konechenkov, Chairman of the Board of the Ukrainian Wind Energy Association, Yuliya Usenko, Chairman of the All-Ukrainian Agency for Investments and Sustainable Development, and Andriy Pylypenko, Head of SE "Guaranteed Buyer". The main challenge for this industry is the fact that 85% of RES capacities are located in temporarily occupied territories. A significant part of them stopped their work or was dismantled and stolen by the Russian occupiers (such as the largest SPP in the city of Tokmak with a capacity of 50 MW and an area of ​​96 hectares). Factors such as incomplete and unstable payments for released electricity by RES producers (and their obligations to creditors), technical limitations of generation and connection to the grid, the increase in the price of the fuel component in the cost of production for producers of electricity from biomass and biogas are also problematic. In search of new opportunities for themselves, RES producers pay attention to such opportunities as the export of electricity abroad and the development of energy storage opportunities. In the short term, further development of the industry largely depends on the position of the Ukrainian government regarding payments under the feed-in tariff, and in the long term - on the strategic decision regarding the post-war energy reconstruction of Ukraine.

You can view the video recording of the discussions (in Ukrainian) following these links:

1. Energy Efficiency as a Guiding Line in the Post-War Reconstruction of Ukraine

2. Future of The Fuel in Ukraine: Biofuel and Electromobility As Alternatives To The Permanent Fuel Crisis