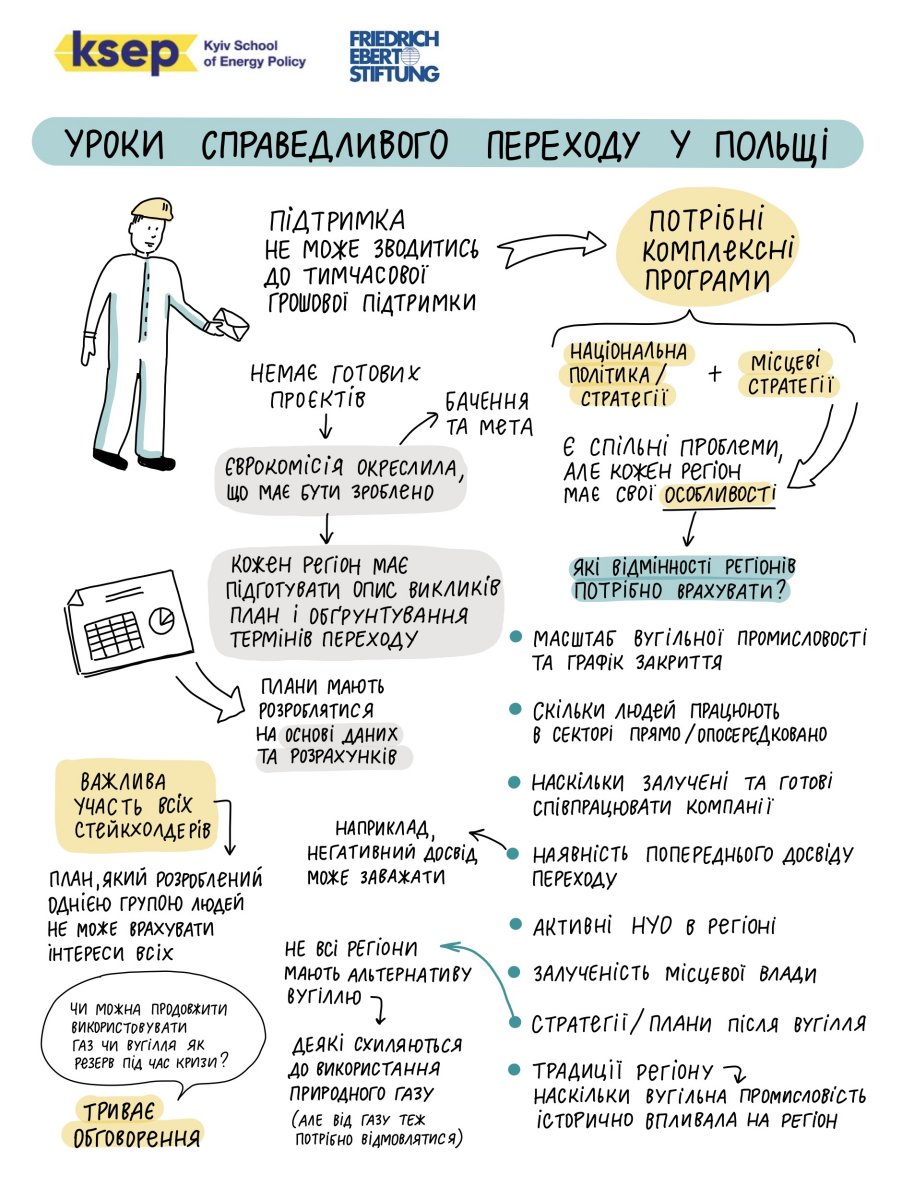 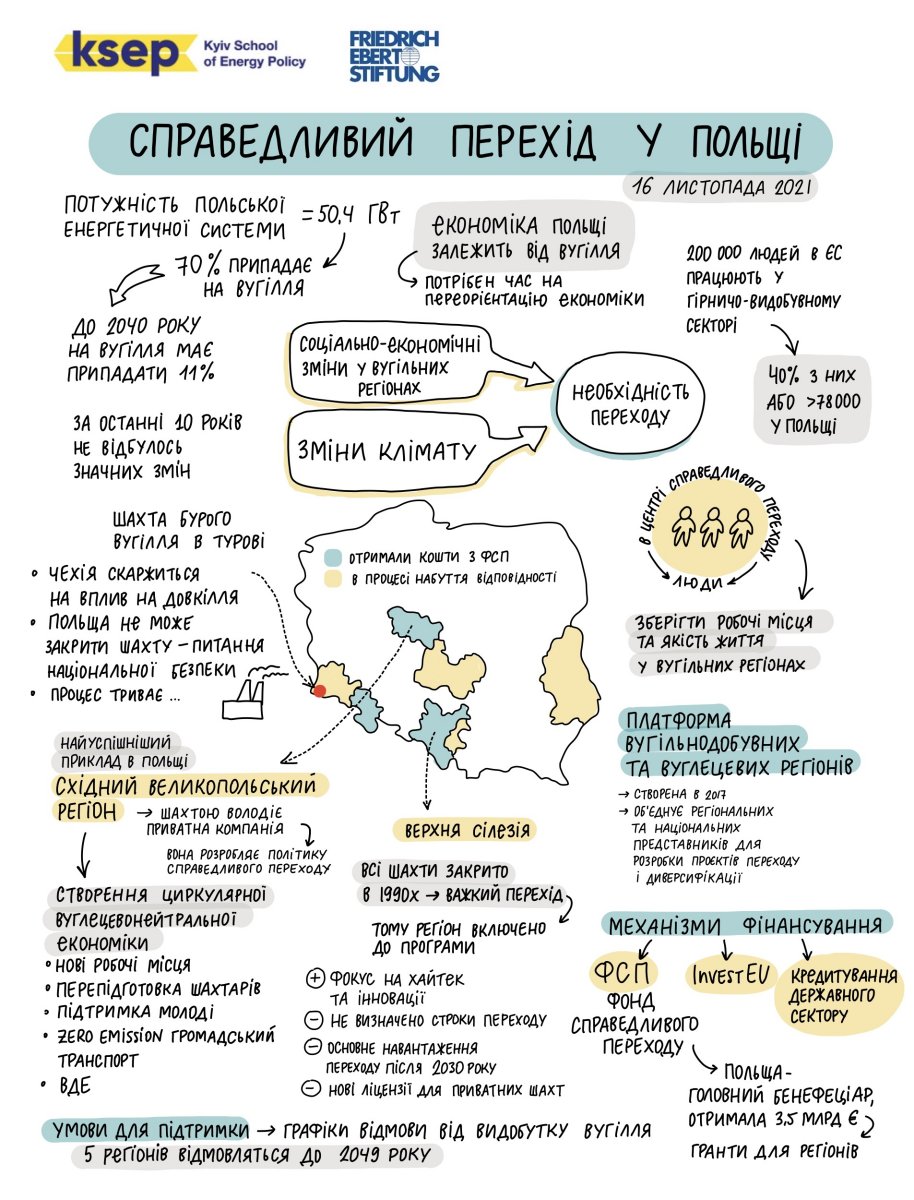 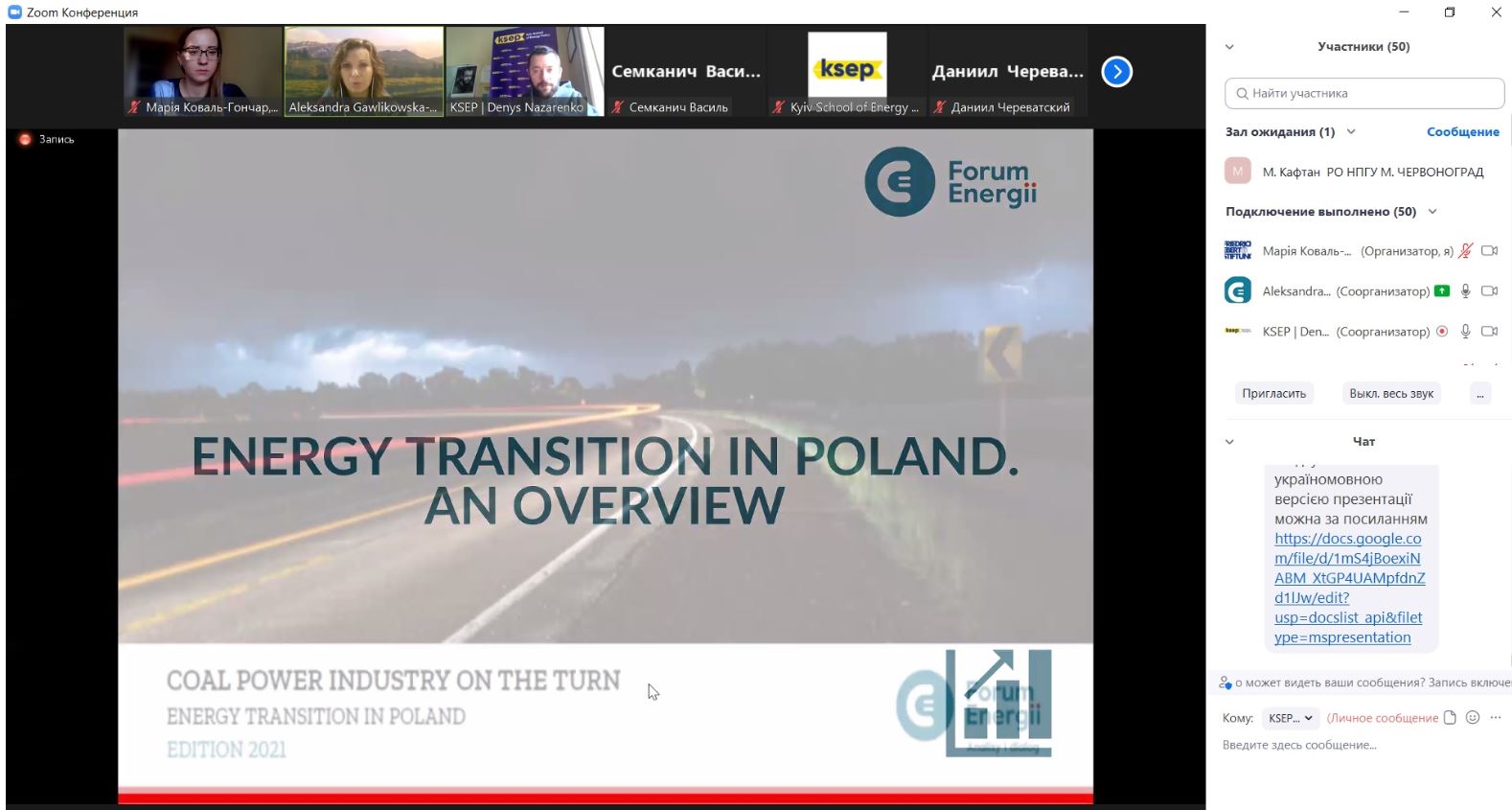 On November 16th, 2021, the second session of a series of webinars on just transition of coal mining regions took place. This time the session focussed on just transition in Poland. The seminar was organized by the Representation of the Friedrich-Ebert-Foundation in Ukraine and the Kyiv School of Energy Policy. Representatives of NGOs, the national government, the local governments, and the industry took the chance to widen their knowledge on coal phase-out. The presentation was prepared by Aleksandra Gawlikowska-Fyk, expert from the think-tank Forum Energii. At the beginning of the seminar, Aleksandra Gawlikowska-Fyk gave an overview of the current status of the energy transition in Poland. In 2020, coal for the first time accounted for less than 70% of the energy production. Simultaneously, the expansion of photovoltaic plants, wind farms, and gas-fired co-generation units led to an increasing share of renewable energy.

In the next step, the expert presented the Just Transition Program of the EU, which already started in 2017 with the Platform on Coal and Carbon-Intensive Regions. The platform facilitated the launch of pilot projects and the exchange between experts from different coal regions in the EU. To finance the coal-phase out the EU established Just Transition Mechanism, that consists of three pillars, the Just Transition Fund, an investment scheme, and a public sector loan facility.

Before the start of the last part of the seminar, participants learned in a quiz that 40 % of employees in the coal sector in the EU work in Polish coal mines. Then Aleksandra Gawlikowska-Fyk introduced the plans of different Polish coal regions for the just transition. Today three coal regions in Poland are priority just transition regions, explained the expert. These regions have already participated in the Platform on Coal and Carbon-Intensive Regions. They started early to develop plans and ideas for their path to a low-emission or zero-emission future. According to Aleksandra Gawlikowska-Fyk, there are some musts for ensuring a successful just transition process, such as developing a regional approach to the transition, capacity building, and the integration of all stakeholders.

The next webinar of the series on November 30th, 2021, with Dr. Annekatrin Niebuhr from the Kiel University will focus on the social and regional aspects of just transition process.

Following the link, you can watch the video-presentation of the event.