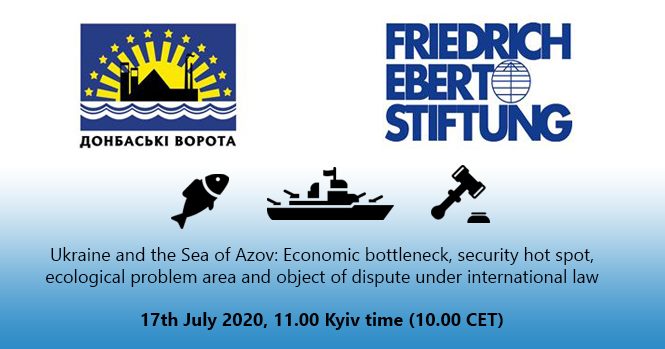 On July 17th 2020, the Representation of the Friedrich Ebert Foundation together with the NGO “Donbas Gates” initiated an expert discussion, aimed to evaluate and deliberate the economic, ecological and security-related situation in the Sea of Azov. To this end recognized Ukrainian and international experts from various institutions, as well as representatives of state bodies, were invited to present different aspects of the situation in the Azov Sea. Oksana Zolotaryova, Deputy Director-General for International Law, Ministry of Foreign Affairs of Ukraine, spoke about initiatives to launch the UNGA resolutions on the Sea of Azov, as well as Ukraine’s legal and political efforts to ensure free passage of ships to the Mariupol and Berdyansk seaports. She mainly spoke about the claim of Ukraine against Russia in the Arbitration Tribunal in the Hague, constituted under the United Nations Convention on the Law of the Sea (UNCLOS).

Afterwards, Hanna Shelest, Editor-in-Chief, UA: Ukraine Analytica, Foreign Policy Council Ukrainian Prism presented her view of the security situation in the region. In her opinion, the Azov Sea should not be considered separately but instead, be seen as a part of Russian aggression towards Ukraine. For the last three years, the emergence of the third dimension of Russian activities in Ukraine has been observed, compared to predominantly land operations and threats before 2017. Strategically speaking, there are three categories of Russian actions in this region: the attempts to limit Ukraine’s access to the sea; support of the constant threat from the sea; breaking safety of navigation in the Ukrainian territorial waters or on Ukraine’s maritime trade routes (it is especially important against the background that 70% of Ukraine’s export goes by sea). David Saha, the consultant of the German Economic Team, spoke about the economic potential of the Azov Sea and the financial implications of transport restrictions in the Sea of Azov for Ukraine.  Now, ship traffic in and out of Berdyansk port is subject to delays, with the construction of the Kerch bridge being a strategic bottleneck. The delays, which picked in 2018 and received considerable international attention, used to last for five days per ship but have never been reduced to zero and amount now to average 10 hours per route per ship. In David Saha’s opinion, if the Azov Sea were to be closed, steel and grain exports could be rerouted. The steel value chain would not collapse, according to the expert, as far as already now around a half of the exports don’t leave Ukraine by the Azov Sea but most probably from the Black Sea ports.  Kostiantyn Demianenko, Institute of Fisheries and Marine Ecology, presented ecological conditions in the Azov Sea (sustainably growing salinity level), as well as spoke about the fishery and its socio-economic role in the region.  Wilfried Jilge, Historian of Eastern Europe, Associate Fellow at the DGAP’s Robert Bosch Center for Central and Eastern Europe, Russia, and Central Asia, set forth Russia’s basic principles in its approach to the South, to which the region of the Azov Sea belongs. Russia’s actions in the area are not only a function of the Russian aggression against Ukraine. The conflict cannot be solved if the partners of Ukraine remain passive with regards to the South. It is crucial for Russia to strengthen the control in the Southern seas, namely over logistical, incl. military routes. Russia strives to exercise control over the Caspian Sea, the Volga-Don waterway, the Azov Sea, the Black Sea, outreaching to the Eastern Mediterranean. The issues of Zmiyiny Island, border demarcation between Ukraine and Russia, operation of the Ukrainian-Russian joint fishery commission, possible actions from the West to counteract hostile Russian activities have also become a subject for discussion.

Further discussions on the security, economy, and social issues, on the Donbas region, are planned for September-November 2020.